I get asked all the time when I’m out shooting or talking about cameras… Why film? It’s not that hard a question for me to answer. I started shooting digital. I got myself a fancy DSLR. Shot 1000’s of images and was never really satisfied with the result. That’s when I realized I had no idea how to take a picture! Sure I could press a button on a digital camera, but I didn’t know how to compose and create a photograph. So I bought my first film camera, a Holga 135. It was a huge change for me. From there I was hooked on film. I realized that in this day and age of “iphoneography”, I didn’t just want to use my phone to take a picture and run it through a filter to get the effect of film. I wanted to learn how to use my camera to achieve the effects that I wanted. Being at this for less than a year I am still learning a lot. I’m still not taking the pictures that I want, but now at least I know how to meter the light before I just press the button.

Going forward I want to use this blog to document my journey with film. I saw a post while I was prepping to send out some film for development at www.oldschoolphotolab.com. They were looking for an “Analog Ambassador”, I thought… I can do that! I’m not the best photographer by any means, but I would love to document my learning process for others to see. So that’s why I started ShootFilmNotPeople. I’m not so much a snob that I can’t appreciate digital photography…it’s just that it’s not the direction I’m going right now. I don’t need the immediate satisfaction of looking at the LCD to see the shot that I took. I don’t mind waiting weeks sometimes to get my film developed. Then when I see my shots, I’m looking at them with fresh eyes. And nothing is cooler than finding an amazing shot that you forgot you took!

I really like Street Photography.  I know that is not everyones cup of tea but I like it.  Here is a shot I took in downtown PHX.  I was out shooting on the street and got into a conversation with this guy about tattoo’s.  He had just had some work done and agreed to let me take a picture. It was taken on a Zorki 6 Rangefinder. 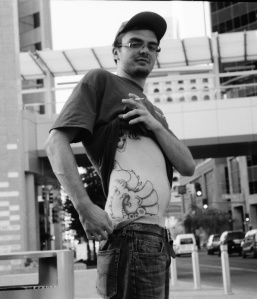